The standing ovation given at the end of Nakkiah Lui’s Black is the New White should be enough to inform you this play is worth seeing. Indeed, this comedy – not without farce – can hardly be faulted. It’s imperfections, moreover, if there are any, only add to its charm.

I can only describe playwright Nakkiah Lui as enlightened given the script. The debate surrounding aboriginality, whiteness, class, privilege, wealth, and power, all of which Lui shows are non mutually-exclusive categories, is nuanced, necessary, and ‘now.’ The utterances that clearly lack sophistication, are naive, or downright cringeworthy are arguably the result of a master craftswoman (Lui) who knows exactly what chord she wishes to strike and when. The moment we believe Lui is simply an aboriginal woman championing her race, we are wrong-footed by that same woman criticising her race. Indeed the ‘white’ voices in this play are as strong as the ‘black’ which makes for thoroughly interesting listening. This is no piece of black propaganda. Indeed, it is thanks to Lui’s critical analysis and avoidance of any patent pro-black/anti-white sentiment that the play ultimately achieves a pro-black stance that suggests rather than prescribes.

The appellation ‘master craftswoman’ must also go to director Paige Rattray who has managed to successfully stage this comic whirlwind that had at times up to nine characters on stage, all of whom at a certain point were involved in a massive (spolier alert) food fight. 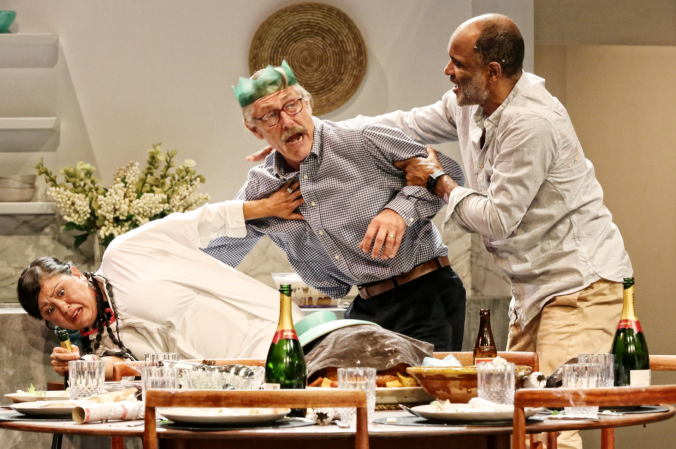 A character I loved but whom I sadly think was superfluous to the action was the ‘Narrator’, beautifully played by Luke Carroll. The play would arguably work just as well without this character. The expository interjections made by this character did shed some light on the story and help to keep the audience feeling light (we were encouraged to stand up and dance to Mariah Carey’s All I want for Christmas… immediately after intermission) but again, this character does not significantly enhance the story. Characters reacting to this ‘ghost’s’ ‘presence in the house – hearing a noise or feeling a wind – did not work at all.

Designed by Renée Mulder – another master craftswoman – the house itself (the set) – an ultra-modern, white (the colour, not the race) minimalist holiday home owned by Ray and Joan Gibson (played respectively by Tony Briggs and Melodie Reynolds), and brought into high relief by Ben Hughes’ lighting, was superb.

Tony Briggs played the loveable but very proud Ray Gibson, an aboriginal man who has ‘made it’ through hard work and determination. But Ray’s gains, despite his hard work, are questionable – what effect has his politics had on the aboriginal community he has always claimed to champion? And does he realise just how instrumental to his success his wife has been?

Joan Gibson, played with a beautiful balance of warmth and spirit by Melodie Reynolds-Diarra, is the supportive wife and mother but her patience has limits and she delivers a wake-up call to her husband that’s been years in the making.

Kylie Bracknell (Kaarljilba Kaardn) plays Rose Jones, the sophisticated, successful, fashion-designer daughter of Joan and Ray. Rose is at once pro-black and anti-white. She gives an icy reception to her sister’s fiancé, Francis (played by Tom Stokes), when he is introduced to the family. Bracknell (Kaarljilba Kaardn) successfully walks the line between ignorance and prejudice; between awareness and acceptance. She shows her naivety by her frequent malapropisms (perhaps overdone but, hey, it’s a comedy) and shows her sophistication when she exemplifies what a strong-willed (aboriginal) woman can create and achieve. However, her sense of what culture is – including what her own culture is – is still developing (as it is for all of us, Lui makes it clear) and she finds herself in the middle of a contradiction: the man she married, (Sonny, played by Anthony Taufa), the man she always believed was aboriginal – in fact, he had always believed it himself! – turns out to be (spoiler alert) Tongan. (Don’t worry, it all ends well.) Taufa played the hypersensitive Sonny without falling prey to slapstick, cliche, or other base devices.

Miranda Tapsell as Charlotte Gibson was excellent. Carrying a torch for aboriginality, for women black and white, and I dare say for a society – again, black and white – striving for equality, inclusivity and harmony, Miranda as Charlotte embodied everything that is human: hope, commitment, frustration, anger, disappointment, sadness, and renewed hope.

And the white fellas? The love-hate relationship between Dennison Smith, played by Geoff Morrell, and Ray Gibson (Tony Briggs) is evident as soon as Smith enters Gibson’s house only to find that his son is dating the daughter of his old political arch-enemy. Morrell’s ability to embody both the character, Dennison, and ‘whiteness’ (think: can’t dance) was outstanding. The play was stronger for all his antagonism, and his comic timing was exemplary. The funniest character, however must go to Vanessa Downing as Marie (pronounced ‘Maree’!) Smith. How she maintained a deadpan expression when everyone in the house was rolling in the aisles I’ll never know. Downing portrayed well an ageing – but still very attractive! – woman not fixed in her ways, open to the merging of cultures – and discovering her sexuality on the side!

The Smiths are clearly strong, perhaps overly stern, conservative parents, which might explain why their son Francis is so emasculate. Granted a young man is usually deferent, even obsequious, when meeting the father of the girl he wants to marry, but I wondered why, in the face of such caustic attacks from Ray, Francis never offers a firm word back. Francis’ character, for better or for worse, reflects on Charlotte – what kind of man has she fallen in love with? Does she want a puppy dog? That said, the comedy was better for a bumbling, can’t-do-anything-right kind of character. Unfortunately, however, although he often argued, Francis didn’t really seem to have an argument. Every other character did.

But as I suggested earlier, any imperfections in this play somehow seem to work in the play’s favour. This is definitely a case of the whole being worth more than the sum of its parts, and people – Australian theatre audiences, at least – don’t give a standing ovation for nothing.